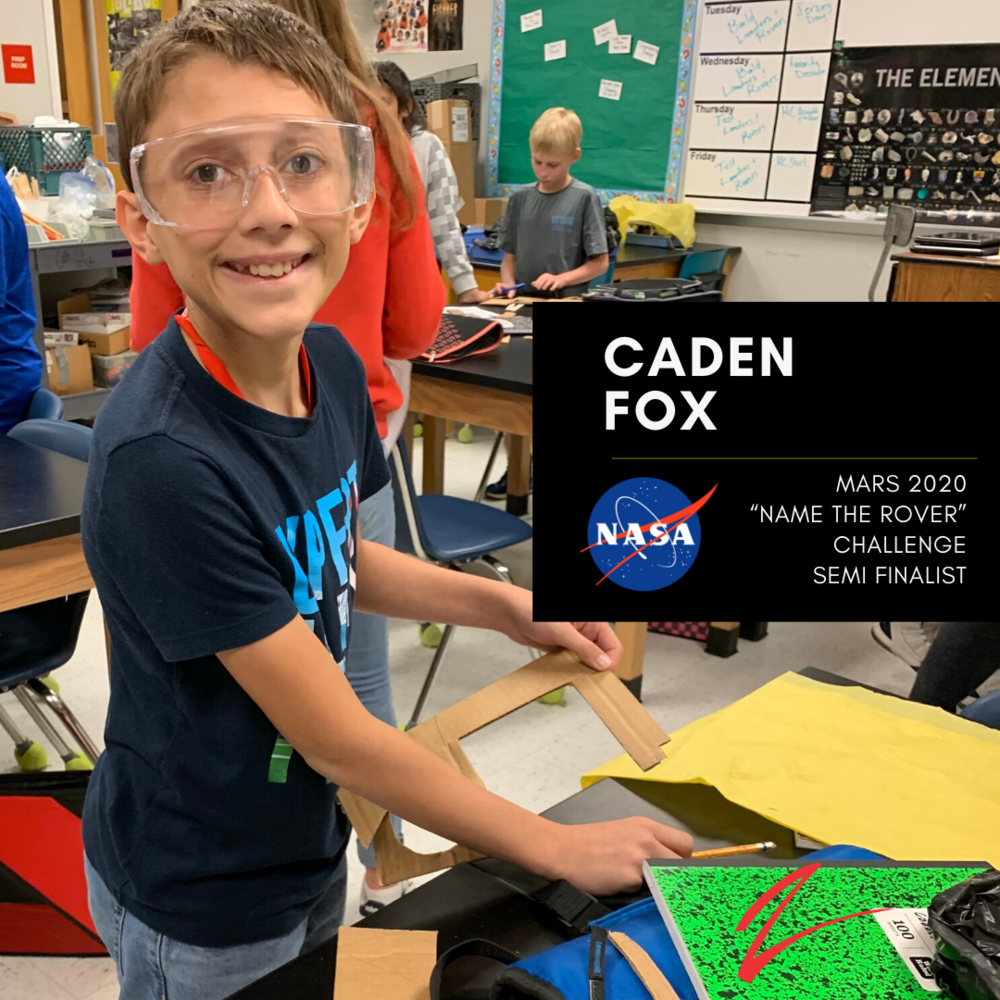 This is your mission if you choose to accept it:  Name NASA’s Mars 2020 rover.

In the 007 movies, this message would self-destruct in 30 seconds but luckily this is not a movie and if his submission is chosen it will live in infamy.

Today the Future Engineers LLC  announced the 156 semi-finalists and a sixth-grade student at Claremore’s Will Rogers Junior High, Caden Fox, was one of those semi-finalists.  Students from grades K - 12 received this challenge at the beginning of the school year. Submissions were based on the appropriateness and significance of the name, originality of the name, originality, and quality of the essay for the semi-finalist round.  Nine finalists will be announced on January 20th followed by a public poll and an interview. The winner will be chosen by February 18th.

Caden proudly chose to honor the heritage that represents his roots and gives him the foundation to explore, his love for adventure and a sense of discovery that feeds his growth mindset.  Here is the essay that placed him in the semi-finalist category.

Siyo adventurer. Siyo is the Cherokee word for hello. This rover needs a name I see! Well here is my proposal. Nunnehi this word is in the Cherokee language it means traveler. The Cherokee were some of the first settlers in Oklahoma my home state.

The Cherokee were travelers and they would be amazed at the fact that we are going to mars! The culture of native Americans is so complex and interesting it truly is a wonder. The reason I came up with this is for my great grandparents. They are Native Americans and proud of their heritage.  Native Americans would be the earth's greatest advocate they lived on the land and never took more than needed. Even if my submission is overlooked and not picked I hope I taught at least one person about this.

Caden is one of Mrs. Michelle Rahn’s STEM students and she shared,  “Caden has a love and curiosity for space exploration! He is an extremely creative student who has an innate ability to understand the nature of science and always asks great questions! He is a joy to have in class! We share a passion for all things NASA especially when we wear our NASA gear on the same day! I’m so incredibly excited and proud of  Caden and can not wait to find out how far he will go...The sky (in this case) is NOT the limit!”

Mrs. Rahn had all her students choose a name for the Rover and write an essay after they designed, built and tested a Mars Rover and Lander.

Teams had to design a lander that could transport an "Egg-stronaut" safely from a 2-story drop inside a target area. Then, they had to take out the rover and show that it could travel down a ramp. At the end of the challenge, students got points for the Rover that traveled the farthest and safely carried the Egg-stronaut to the end of its journey.

Mrs. Rahn entered all her students' essays and they all did a great job! Caden's essay caught the eye of the judges and we're so excited and proud of him!