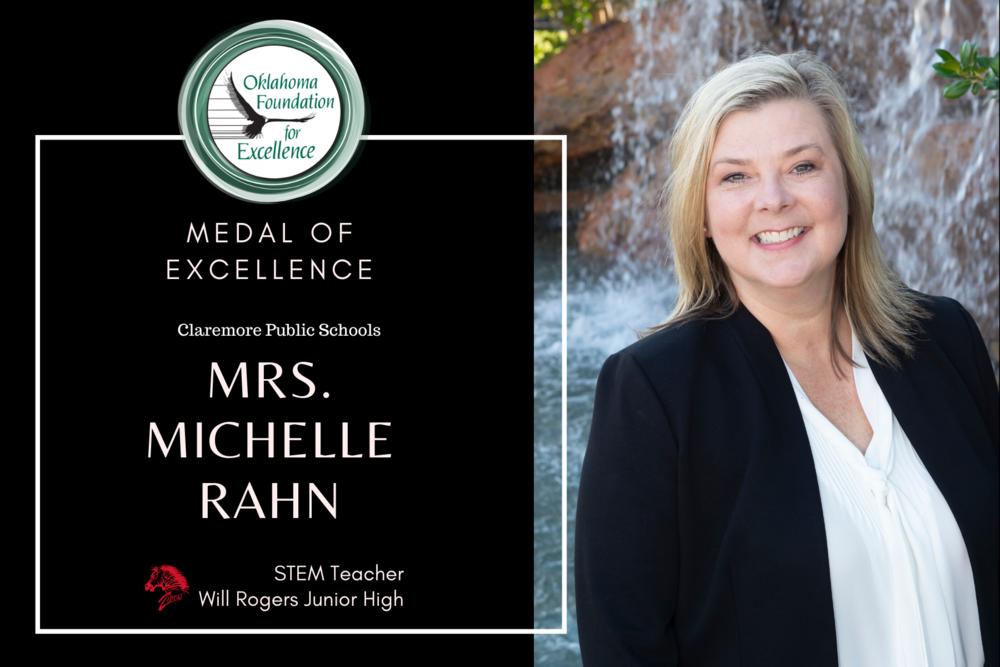 The Oklahoma Foundation for Excellence has announced the winners of its 2020 Oklahoma Medal for Excellence awards will be presented at the foundation’s 34th annual Academic Awards Banquet on May 16 at the Embassy Suites Conference Center in Norman. Each of the five winners will receive a $5,000 cash prize and a glass “Roots and Wings” sculpture, designed by the late Oklahoma artist Ron Roberts and produced by Artistic Glass Studio of Edmond.

“Oklahomans know that education is the best investment we can make for our future,” said Cathryn Render, president of the Oklahoma Foundation for Excellence, a non-profit organization that recognizes and encourages academic excellence in the state’s public schools. “By honoring these exceptional educators, we are sending a message that we value excellence in public schools and the professionals who have given so much of themselves to enrich the lives of our children.”

Michelle Rahn, winner of the Oklahoma Medal for Excellence in Elementary Teaching, teaches sixth-grade STEM (Science, Technology, Engineering and Math) at Will Rogers Junior High in Claremore. Rahn began her career as a small business owner, but discovered her true calling when she volunteered at a camp teaching children about nutrition and diabetes management. The experience prompted her to pursue a degree in elementary education.

Now a 12-year teaching veteran, Rahn has led the charge for her district to focus on STEM education, first by receiving a $23,000 grant to start Claremore’s first elementary STEM program at Westside Elementary School and now to expand STEM education at Will Rogers Junior High.

“Michelle encompasses all the qualities that make a great STEM teacher,” said colleague Ranetta Eidson. “She creates a classroom environment that allows students to problem-solve, work collaboratively in groups, construct with their hands, and think critically and creatively.” As a former business woman, Rahn is mindful to incorporate higher-level thinking skills and strategies such as cooperative learning and inquiry-based investigations to help students prepare for the future workforce.

In Rahn’s classroom, students have worked in teams to design a Mars Rover and lander that is tested by dropping it from height of 20 feet to see if its precious cargo – a raw egg – will survive the fall. In a cross-curricular unit, her students have read the memoir “Rocket Boys” and designed and built their own rockets. Through inquiry-based investigations, students become young scientists, observing natural phenomena, collecting data to develop their own hypotheses and conducting peer reviews as teams. Rahn volunteers after school to host an all-girls STEM Club, which is currently re-engineering old toys to accommodate students with cognitive disabilities.

“Mrs. Rahn connects with students through interactive learning and inspires them to love science and science concepts,” said Alicia Doonkeen, who credits Rahn with inspiring her daughters’ fascination with science. “The students not only learn the subject, but they learn to love the subject!”

Committed to lifelong learning, Rahn invests her summers attending some of the nation’s top STEM teaching institutes and will soon earn her master’s degree in Teaching, Learning and Leadership with a focus on math and science from Oklahoma State University. Among her many honors, Rahn is a 2020 Oklahoma Teacher of the Year finalist and recipient of the Presidential Award for Excellence in Math and Science Teaching.

In addition to presenting the Medal for Excellence awards, the Oklahoma Foundation for Excellence will honor 100 of Oklahoma’s top public high school seniors as Academic All-Staters at its May 16 banquet. The Academic Awards Banquet is open to the public, with admission priced at $50. Registration will open online April 1 at www.ofe.org.